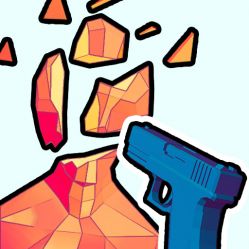 Time only moves when you move. Look around, plan your actions, and only by starting to move, you start time again. Smash enemies to pieces with a pistol shot. Use an assault rifle to fire heavy fire. Destroy multiple enemies with one shotgun blast. Take weapons straight from the enemy's hands. Explode gas cylinders and throw objects and weapons at enemies. Dodge bullets in slow motion. Crush all enemies without taking damage!